"Nothing is limited": University of Phoenix alum's grit and determination prove not even the sky is the limit

Those are the last words Shammai Terry (MBA, 2020) remembers hearing before slipping out of consciousness. She woke up in the intensive care unit 11 days later.

Earlier that night, she’d been on the phone with a friend, complaining of a stomachache. She went to the closest emergency room and was sent home with pain meds. By morning, her stomach was so swollen that the mom of three said it resembled a full-term pregnancy.

She called 911. She made sure the paramedics planned to take her to a different hospital. And her last words to the ER doctor, a pancreatitis specialist, before she fell unconscious were, “Are you going to keep me?” When he reassured that yes, he did plan to admit her, the lifelong goal-setter and go-getter finally was able to close her eyes.

Terry, the sole breadwinner for her husband and three children, spent her 36th birthday unconscious, her organs under attack from a cascade of changes triggered by pancreatitis-induced sepsis. “Just to put it frankly, I almost passed away,” she says.

Terry’s road hasn’t always been easy. In fact, it hasn’t ever been easy. But now with a new lease on life following the infection that nearly claimed it, Terry tells her story with the abandon of one who has always lived a little close to the edge.

Hospitalized in the ICU for a full month in early 2020, Terry says no one had really heard of COVID-19 when she checked in, but it was sweeping the globe by the time she checked out.

Like many navigating the realities of a pandemic-affected world, Terry took stock of her health, relationships and career in 2020. For her, it was a year to reevaluate life and where it was headed. To do that, it was impossible for her not to reflect on where it started.

Interested in learning more about the Master of Business Administration at University of Phoenix? Discover what our program offers!

Like many UOPX students, she didn’t pursue college on a “traditional” path. Though she started college straight out of high school, she subsequently became pregnant, took a break from school and, by the time she enrolled at UOPX as a 23-year-old, she was a single mom with a 3-year-old daughter and 1-year-old son.

At age 25, she completed her Associate of Arts in Criminal Justice and started right away on a bachelor’s in business administration. Once again, life intervened. “In the latter part of 2010, I got laid off. I was a single mom and it was either feed [my] kids or stay in school. I chose to feed my kids,” she says, adding that she had to pause her educational journey.

She took a job with a network security firm for two years but, after a merger, was laid off again. And that’s when an unexpected twist took her career in a different direction. A former colleague shared a job lead, but there was a big-time catch: It was with a company that sold law enforcement solutions, such as crime analytics, predictive analytics and mission-critical communications systems.

Not throwing away her shot

“I took a shot,” says Terry, now a national sales director for a company that provides law enforcement solutions. “I found a way to kind of love law enforcement. I’ve met high-caliber police officers and federal agents, and I had to put what happened with my family when I was young into perspective. What working in this field has done, along with walking with my brother, is it has given me more empathy. I had to find that balance in order to move forward,” she says.

Her journey forward has also been enhanced by her decision to continue on in her educational journey. “Learning does give you the ability to do so much in this world,” she says, adding that in 2017, she decided to finish the bachelor’s degree she’d abandoned seven years earlier.

She completed her business degree and then immediately started her Master of Business Administration, both with University of Phoenix.

From the moment Terry decided to go back to school, she has added new skills that have helped enhance her career. And she’s not done with her education. She plans to add two initials before her name. “I’m going to get my Doctor of Business Administration,” she says.

Even as she has moved forward, Terry has discovered that the trajectory is rarely a straight line. And there are always stops and starts.

After surviving her health crisis in 2020, Terry found the job she was in at the time no longer fit her life, especially given her new needs. “When I got out of the hospital, they weren’t understanding that I needed to recover,” she says, adding that she now manages a cascading set of health issues, including liver problems, high blood pressure and diabetes.

“Every aspect of my life is razor-focused on staying alive,” she says, noting that, while she has lost 45 pounds from healthy lifestyle changes, she walked a slow road to recovery in those early months.

She took time off to recover, and by the time she reignited a job search, the realities of a COVID-19-affected job market forced her to take a job below her qualifications. She couldn’t find anything at the level she had previously worked at, so she resigned herself to starting over. “I even removed some higher-level positions my LinkedIn profile just to get a job, taking off my director and manager roles. My resumé was scaring people,” she says.

Read about more alumni who, like Shammai Terry, didn’t let challenges stop them from achieving their dreams.

She landed a job as a direct seller, a career regression but a job nonetheless. Her frustration mounting, she took advantage of University of Phoenix’s Career Services for Life® commitment to students and graduates that includes lifetime access to career support.

Frustrated that she was underemployed, Terry was ready to trade industries. She began working with Ricklyn Woods, a UOPX career advisor. When they first met, Woods felt Terry had lost her confidence and had doubt about pursuing higher-level roles. Through their work together, Terry began to see her significance again and remembered what she loved about the industry she was in.

Woods helped her discovered how to articulate her skills, experience and, as Woods put it, “awesomeness,” on her resumé, on her LinkedIn profile and in interviews. Terry told Woods that she wanted to move back into a director role, so Woods gave her some pointers on how to talk with executive personnel about that. “I was on the ledge, and she talked me off,” Terry says.

“For many people, their career journey is anything but linear. There are often highs, lows, ups and downs,” Woods says. “Sometimes you even have to take a step back in your career, which can sometimes cause a person to lose confidence and discount their worth.”

Woods believes their work together helped Terry give herself permission to prosper in her career. “I believe it that once Shammai believed in herself again, others began to believe in her, which helped her land her new role.”

“I think I got promoted because of the advice she gave me,” Terry says, adding that she is now thriving in her current role as national sales director for that company.

The proud mom of two teenagers and a 7-year-old, Terry teaches her kids to live by the same mantra she has quoted many times: “Don’t tell me the sky’s the limit when there [are] footprints on the moon.”

“I make a goal and I go for it. I don’t stop until I accomplish the goal. I’m not a quitter,” Terry says. “I tell my 17-year-old, who is about to go fly on her own in this world, ‘Sleep when you’re dead. Accomplish your dreams. Nothing is limited.’” 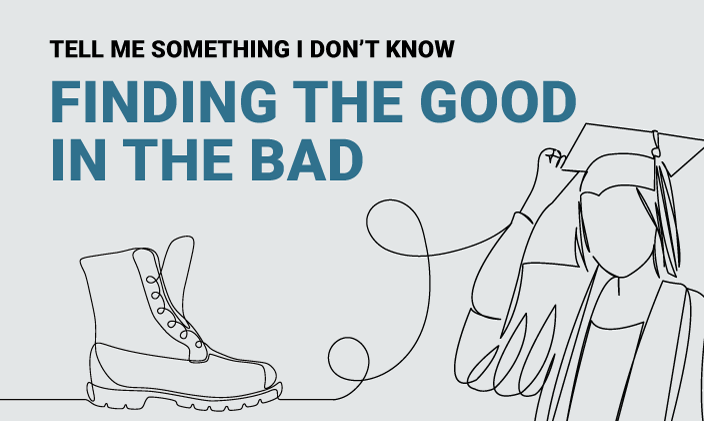 Finding the Good in the Bad With Alumna Barbara Smith