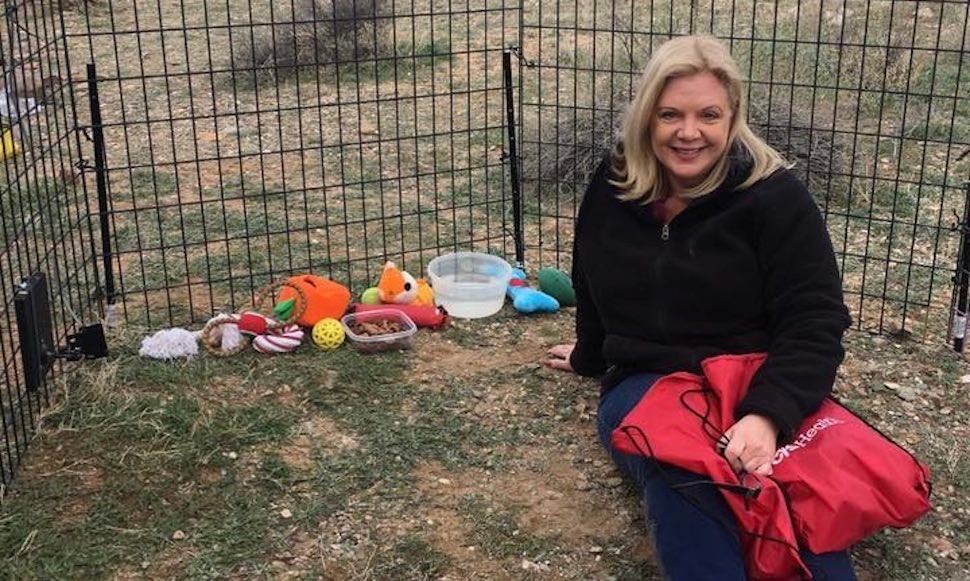 Cheryl Naumann walked along the side of the I-40 freeway near Flagstaff, checking behind every bush in search of six-month-old Bella, a puppy who was thrown from a car during a rollover crash.

The odds of finding Bella alive and well seemed grim. It was May 27, 2019, 13 days since the accident, with temperatures dropping below freezing on some nights and even an unseasonal snowfall. The young man who was driving the car was taken by helicopter to the hospital for treatment of serious injuries. There had been no sign of Bella at the scene. Crushed at the prospect of losing Bella, the man’s family enlisted the help of HARTT ― the Humane Arizona Rescue and Trapping Team ― to help find the missing puppy.

Just as Naumann, founder of the volunteer organization, was nearing the end her search of the area near the crash site, she heard whimpering from the brush not too far from where she was standing. There was Bella, emaciated, shivering and afraid, her leash tangled around a bush. Naumann gingerly untied the leash and rushed Bella to the vet, where she received medical attention and was soon reunited with her family.

“It’s very rewarding, reuniting these animals with their owners,” said Naumann, who reunited Bella with her owner, who made a full recovery. “It’s my passion.”

Bella’s story is one of many that Naumann recalls when explaining the reason she started HARTT, now 50 volunteers strong and dedicated to humanely catching lost family pets, abandoned and seriously injured cats and dogs, and stray dogs.

Most calls to HARTT are from owners of lost pets, but some recoveries are of strays who end up in a loving home after their rescue. More than 800 animals in Maricopa County, Ariz., have been rescued through the use of  HARTT’s unique traps, each of which entices the animal to a location, usually with treats, then contains the animal without harm.

Most animals in need of rescue aren’t aggressive or mean, Naumann explained. Rather, they have low self-confidence resulting from the emotional or physical trauma of being lost, or because of a lack of a prior positive history with people.

“Most of the animals we rescue are very shy,” she said. “They’re like the shy kids in school who don’t have a friend to sit with at lunch.”

Naumann has loved animals since she was a child, but her interest in rescuing lost animals began during her time as CEO of the Arizona Humane Society, and while serving on the board of a number of animal welfare organizations. She realized that options for bringing animals in safely and humanely were limited. Her heart led her to begin trapping animals on her own in 2012, just a few years before she started working as a human resources leader at University of Phoenix.

“Most of the animals we rescue are very shy. They’re like the shy kids in school who don’t have a friend to sit with at lunch.”

After five years, Naumann realized that the need was so great, a larger network was needed to save these animals. That’s when she organized HARTT and inspired volunteers to spend their free time locating and trapping lost animals. Like Naumann, most of these volunteers devote their free time, nights and weekends, after their work and family responsibilities are fulfilled, to rescuing animals in distress.  The organization has grown to include humane trapping workshops, foster and adoption services, and a social media network offering support and resources for lost pet searches.

The lives and welfare of animals in emotional and physical distress are in the hands of their human counterparts, she said. “We are their only advocates,” Naumann said. “If we’re not doing this, they won’t be saved.”

Sometimes Naumann brings her work home with her. She adopts dogs who she feels need a little extra love. Four dogs, Kirby, Hannah, Daisy and Tiffy, are part of her family, as well as a once-feral cat named Piper. Piper was found on the grounds of the luxury pet boarding business, Second Home Pet Resort, which she and her husband, Roger, built and opened in 2008. Naumann said that Roger is very supportive of her love for rescuing pets and that he often tries to convince her to keep many of them.

HARTT’s Northwest Team Leader Beth Buchanan said Naumann is literally the heart of the HARTT organization. She’s a nationwide expert on trapping, she’s passionate about rescuing animals, and she provides unsurpassed leadership — much in the same way she does in her role at University of Phoenix.

“She’s just a great, great leader,” Buchanan said. “People respect her, and they are in awe of her.”